A new Technical Board will be elected for Django 4.0+. All DSF Members are automatically eligible to vote. if you are not a DSF Member but would like to apply to vote, please register online.

These releases address a security issue with severity "high." We encourage all users of Django Debug Toolbar to upgrade as soon as possible. 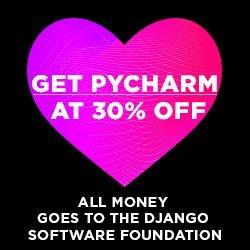 Until April 29, you can purchase PyCharm at 30% off and the full purchase price will be donated to the Django Software Foundation.

An interesting look at building and deploying an intentionally small scale Django site.

Fluent in Django: Improving your application

The second part in a series covers uploading an image, using packages, pagination, and customizing the admin.

Embrace the Grind by Jacob Kaplan-Moss

Sometimes, programming feels like magic: you chant some arcane incantation and a fleet of robots do your bidding. But sometimes, magic is mundane. If you’re willing to embrace the grind, you can pull off the impossible.

Reindexing all tables after upgrading to PostgreSQL 13 by Adam Johnson

Adam shows how and why reindexing is a good idea with PostgreSQL 13.

Last year, Apple announced that they would transition their entire Mac line from Intel processors to their ARM64 Apple Silicon chip called the M1. Several weeks ago, I started testing development on MacBook Air with the Apple M1 chip.

The VaccinateCA project was ported quickly from AirTable to Django. Read Simon's writeup about how that went and some nice OSS projects that helped get there.

Every element I use for the basic structure of a HTML document, with explanations why.

Jackson is the CTO of Project Beacon, a social benefit organization that increases the availability and decreases the price of Covid-19 testing in Massachusetts. He has a long history as an engineer and executive working in tele-medicine including previous stints with US Digital Response, PathAI, Care.com, LinkedIn, and many more.

Migrating from Django 1.7 to 3.1 is no small task. Learn how to successfully leapfrog a massive Django/Python upgrade.

All the missing SQLite functions.

mbi/django-rosetta: Rosetta is a Django application that eases the translation process of your Django projects

No spam, ever. We'll never share your email address and you can opt out at any time.